More than 100 people held a tailgate party in the riding of Ontario Education Minister Stephen Lecce on Saturday afternoon to show their support for public education.

Liberal MPP Mitzie Hunter, former Liberal education minister, attended the event in the parking lot of Longo's, a grocery store, at the intersection of Jane Street and Major Mackenzie Drive West in Vaughan, Ont. Lecce presents King-Vaughan in the legislature.

The community event, organized by York Communities for Public Education, a coalition of parents, students, educators and education workers, featured music, free hot dogs and drinks, a barbecue, and information about provincial cuts to education funding.

"We've come together to say we are very concerned with the direction that education policy and funding is going in this province," said Skylar Maharaj, spokesperson for the Toronto and York Region Labour Council, one of the groups in the coalition.

"We want other people in our communities to know about it and to know that we have a voice."

Maharaj said the tailgate party was not an official protest. The intent was to raise awareness about provincial government actions that the coalition believes are harming public education. 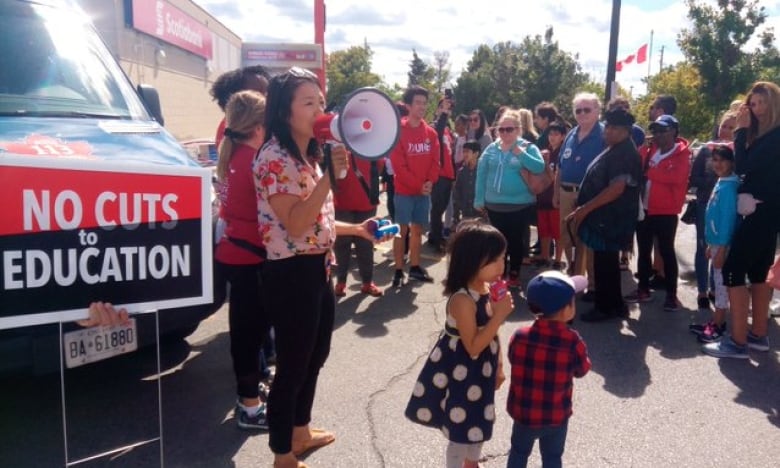 An organizer said the tailgate party was a community event, not a protest. Here a speaker addresses the crowd, explaining how funding cuts are affecting public education. (Twitter)

"The concern is very much around the cuts to education. We think that there is very good reason to believe the cuts that they are putting in place are actually setting up our public education system for failure," she said.

"We want our public education system to be strong because not everybody can afford to put their kids in the private schools. We shouldn't have that. This is not the system we want for our kids."

She said the message to the minister is: "Our communities are strong because our public education system is strong and we want to keep it that way."

People held placards that read: "Show Your Support! Defend Public Education! #CutsHurtKids." One person brought an effigy of Ontario Premier Doug Ford with a sign that said: "Thug Ford gets a Failing Grade."

Protests have followed the government's pledge to increase class sizes, introduce mandatory e-learning modules at the high school level, and cut as many as 3,000 full-time teaching positions.

For his part, Lecce has said the government is putting money into the public education system.

"As education minister, one of my most important responsibilities is to make sure that the students of today get the skills and self-confidence they'll need to get good-paying jobs of the future," Lecce said in a statement on Sept. 3, the first day of school.

"That's why our government is making historic investments in education, bringing greater awareness to the importance of mental health, emphasizing math and financial literacy and modernizing the curriculum so it better matches the evolving needs of the job market."

Maharaj said the coalition got permission from property management to hold the event in the parking lot.

"We are just ripping off of this idea of parking lot parties that the Conservatives have talked about. We are just kind of ripping off their own language and saying: 'You know what, we'll tell you what we want to use our parking lots for,' " she said.

"We can use it as a community gathering space and we are going to use it to talk about some important issues to us."