Ontario's Green Party leader urged Canadians to vote "for the country we want" at a Hamilton campaign event Thursday, kicking off the first full day on the federal election trail.

Mike Schreiner, campaigning for the federal wing of the party, spoke to about two dozen people in a McMaster student bar, rallying support for local candidate Victoria Galea.

It was the first of two Green Party events in Hamilton Thursday, drawing a range of ages to the Pheonix Bar and Grill. A panel was also scheduled for Thursday afternoon with Schreiner and several local Green candidates.

Schreiner, MPP for Guelph, appealed for Green support during a "critically important" federal election, with the climate crisis "staring us in the face."

He referenced "strong" polling numbers for the Greens, who are vying for official party status this election.

According to CBC's Poll Tracker, an aggregation of all publicly available polling data, the Greens party is sitting at 10.8 per cent support, just behind the New Democrats' 12.6 per cent. 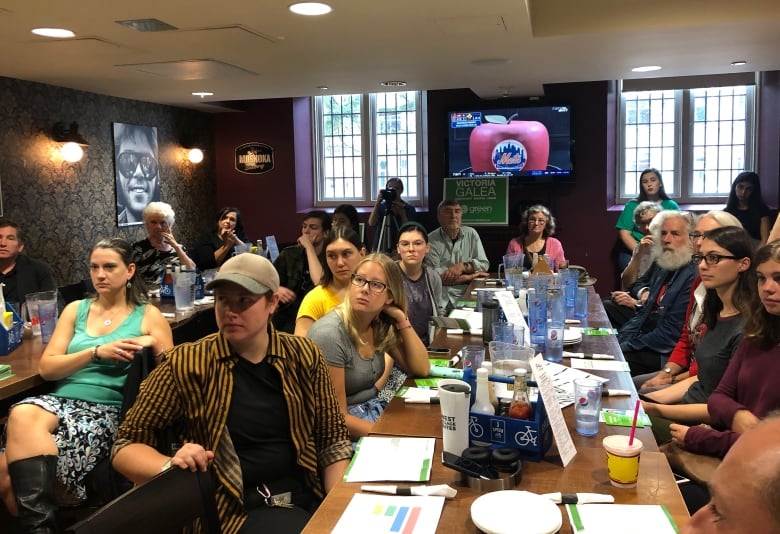 About two dozen people were at McMaster's Pheonix Bar and Grill Thursday morning for the Green Party event. (Laura Howells/CBC)

One audience member said he wanted to vote Green, but was concerned about vote-splitting.

"Every vote for the Greens pushes the other parties to adopt more Green policies," he said.

McMaster student Elizabeth Svyatnenko, 21, was persuaded by that argument —  in the past "it kind of felt hopeless," to vote Green, she said.

She's voting in her first federal election this year — and climate change and education are two of her top priorities. 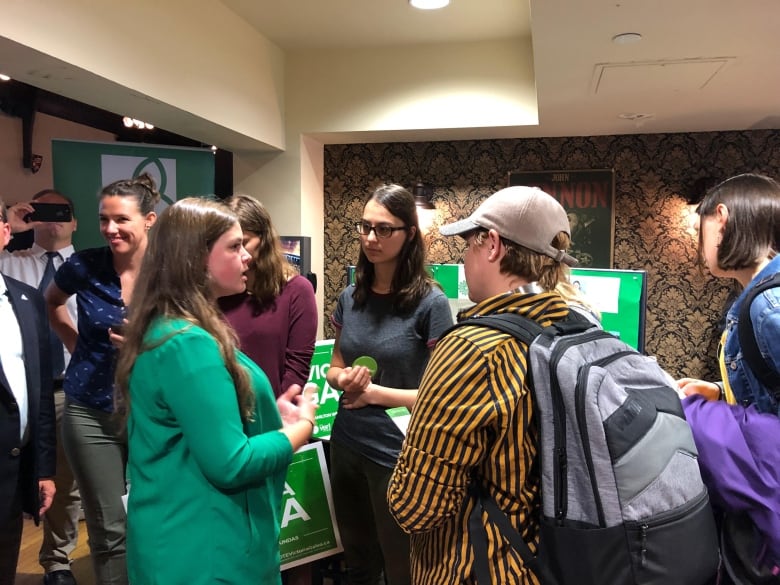 Climate change is her main voting issue, she said — but with climate issues, "it feels almost like you're speaking into the void a lot of the time."

Galea, who is running in Hamilton West—Ancaster—Dundas against Liberal incumbent Filomena Tassi, said there's an opportunity to mobilize her community this election.

People in Dundas are seeing a direct impact of climate change, she said, referencing rising water levels and flooding.

Galea said proportional representation is a key issue for her riding, where there are three "completely different" communities. She also underscored the Greens' pledge for free post-secondary education — her district contains both McMaster University and Mohawk College.

Schreiner said backlash in Ontario to Doug Ford's cuts can create an opportunity for parties like the Greens to get ahead federally , and called out the Liberals' backtracking on proportional representation.

He talked about money loss from extreme weather events, and the "economic imperative" of a green economy.

There's a need to spend on more healthcare workers, he said, while protecting spaces like the Greenbelt and farmland.

The federal election is scheduled for October 21.