When Hamilton's Hortense Gordon embraced abstraction, she became one of this country's earliest non-representational painters.

She fell in love with abstraction in the early 1930s, at a time when Hamilton — and the rest of Canada for that matter — was not quite ready for it. Her husband, John Sloan Gordon, was not a fan, but in an interview in 1955, Hortense Gordon said he said, "If she wants to paint in the modern way, she can."

Her "Composition Red and Gold" is on show in The Collection at the Art Gallery of Hamilton.

Gordon (1881-1961) was not the only woman with an attraction to abstraction. The origins of this radical modern movement have always been associated with male artists such as Kasimir Malevich, a Ukrainian working in Russia, and Wassily Kandinsky, a Russian working in Germany. Kandinsky claimed, in 1935, that he invented abstraction in 1911.

But Sonia Delaunay, a Russian in Paris, was also experimenting with abstraction in 1911 and 1912.

The real pioneer, however, was Hilma af Klint, a Swedish artist. She painted abstract compositions as early as 1906. By 1914, she was working with the simplest of geometric shapes.

And in Canada, Gordon is among the earliest creators — male and female — of abstraction.

She began her career by painting landscape and still life. Trips to Europe encouraged her to brighten her palette and loosen her brush strokes. After a visit to New York City in 1929 to see some Mondrian paintings, she was hooked.

In the 1950s, she joined Painters Eleven, a group of like-minded abstractionists. She and Alexandra Luke were the only female members. The group began by exhibiting their works among window displays in Simpson's department store in downtown Toronto.

In "Composition Red and Gold," Gordon offers us a dynamic arrangement of shape and colour.

A variety of soft-edged shapes clash. The big red one in the lower half looks bigger and heavier than the others. It pulls the composition downward. But a cluster of smaller gold-toned vertical shapes in the top half pull the composition upward. 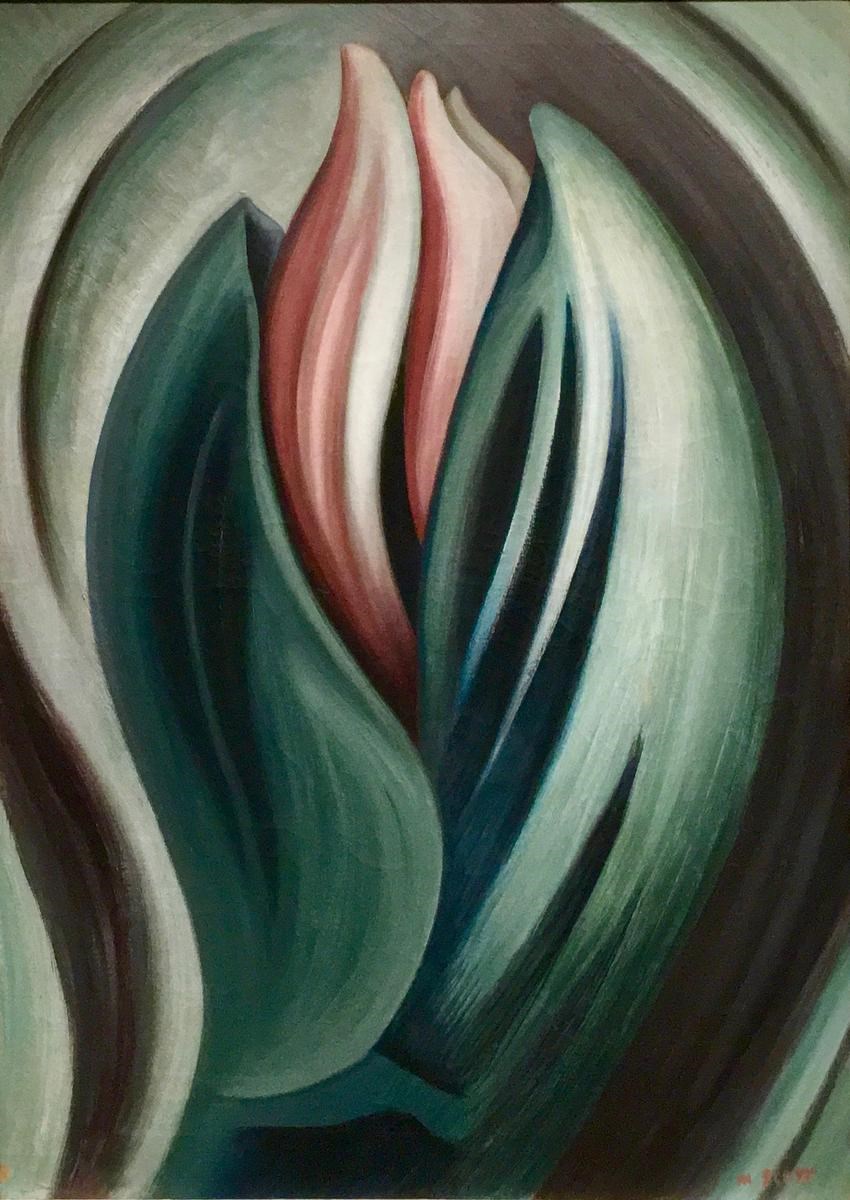 Traditionally, paler colours designated the foreground of a painting and darker, richer ones the space behind. But the big red shape is bigger and brighter than the others, so it's refusing to stay in the back.

Gordon's oil dates to 1956. At this time, another pioneer of modernism in Canada, Marian Dale Scott (1906-1993), fully embraced abstraction — but not before a gallery owner told her to consult her non-painter husband before taking the plunge.

But before she did, the Montreal artist tackled urban views, the human figure and florals. In the 1930s, she created a series of flower paintings in which she simplified her subject. "Bud," for instance, dates to 1936. It's on show at the AGH.

Scott brings us up close to a flower about to bloom. Her approach is not lifelike. The setting is a dynamic background of curving bands. And she reduces the flower's structural variety to sinuous green lines and pointy shapes that flank a red and white curved central shape.

Regina Haggo is giving an illustrated talk, Rubens Revealed, at the Carnegie Gallery on Thursday, Sept. 26, at 7 p.m. It's a look at how and why Peter Paul Rubens, a Flemish artist, grew into a leading baroque artist in the 17th century. For information and tickets, $12, phone 905-627-4265.

What: Works from the permanent collection