Biggest turnout ever at Raptors 905 open tryout in Mississauga

Almost 100 basketball players turned out for an open tryout for Raptors 905, the team's developmental league team.

Two courts at the University of Toronto's Mississauga campus were packed with players, shoes squeaking, sinking shots, and doing their best to show Raptors’ scouts they’ve got the skills.

“It feel great, everybody’s watching, so you gotta put on your best performance.” That’s how Xavier Moon from Alabama described his feelings after winning one of the drills in the first session.

Players from across the globe were doing whatever they could to try and earn a spot on the team's practice roster, and hopefully the final lineup. And there was plenty of Canadian talent too.

Jasonn Hannibal grew up in Cooksville, and graduated from Port Credit Secondary School. So he was excited about trying out for his “hometown” organization after playing all over the world.

“I’ve played in Mexico, Morocco, Iran, Australia, China, Hong Kong, here in the Canadian league for a little bit. And I just want to keep it going, keep playing as long as I can.”

The 31-year-old signed up for the tryout as soon as it opened up, and being associated with the Raptors after the NBA team took the title is a huge deal for the 6 foot 10 inch big man.

“I’ve watched basketball grow, this whole time. And then seeing how big it is right now, this makes me very happy to be here, tryout for a team in my hometown, and hopefully make it.”

St. Hubert, Quebec’s Kordell Greenaway was another hopeful being put through the paces. He played at Vanier University in Montreal, but now wants to take his talent to the next level.

“It means the world honestly. It shows Canada basketball, how we’re on the rise, who everything’s coming together great, and for the 905 team as well.” 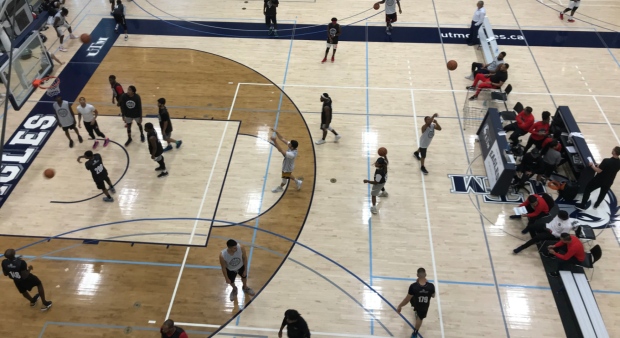 For the Raptors 905 organization, the interest from so many players is a blessing.

Chad Sanders is the team’s general mnanager and he understands why this year things are different. “I think part of that is to do with the success of the Raptors, and the buzz of basketball in the city, and in the country.”

Sanders said players understand what they’re in for if they manage to secure a spot in the organization. “People have a passion. They see what’s going on here. They see the process of our 905 program and players that go from 905 to the NBA and I think they want to be a part of that. I think that’s part of our appeal.”

If any of these players at the tryout make the team, they will be earning $35,000 for the season. But will be hoping for a shot at the big leagues, later in their careers.