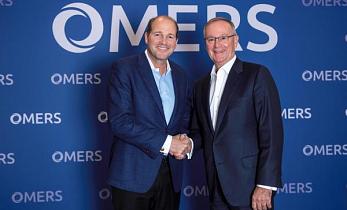 OMERS is pleased to announce the appointment of Blake Hutcheson as its new CEO effective June 1, 2020.  Mr. Hutcheson is currently President and Chief Pension Officer, and will succeed Michael Latimer, who is retiring after two decades with OMERS, the last six years as CEO, on May 31, 2020. The transition will commence in early January, consistent with OMERS succession plan, and will remain seamless over the period.

“Michael has done an outstanding job as OMERS CEO,” said George Cooke, Chair of the OMERS Administration Corporation Board of Directors.  “He led OMERS in the development and successful execution of our 2020 strategy, which provided clear direction for our members, sponsors, stakeholders and employees and saw significant growth in assets with steady improvements in the Plan’s liabilities and financial position.  At the same time, he focused on building a strong culture and establishing a workplace where employees are fully engaged.

“The Board is very confident in Blake’s leadership given his track record in building strong relationships, successful global organizations, showing great investment judgement and understanding all aspects of OMERS and its vast stakeholder group,” continued Mr. Cooke. “His proven motivational style and distinguished career is exemplary, as is his commitment to the future of OMERS.”

“It has been a privilege and an honour to lead the talented group of people at OMERS,” said Michael Latimer. “When I first took the role of CEO, I established three priorities for our organization:  to focus on our people, our results and our culture so that we ensure the OMERS plan would be secure, sustainable and meaningful to our 500,000 members.  I believe with the quality of our people and the balance sheet we have built, OMERS is well-positioned to weather the challenges and seize the opportunities that lie ahead.”

Under Mr. Latimer’s leadership as CEO, OMERS assets have grown from $65 billion to well over $100 billion, growth of more than 50%. OMERS achieved a solid annual net return of 8% over this period, well above the Plan’s discount rate, improving the Plan’s financial position to near full funding.  Over the same period, the organization successfully deployed $33 billion of capital as a result of its asset mix shift into private investment asset classes while expanding its global footprint and opening offices in Singapore, Sydney, Paris, Berlin, Boston and San Francisco.

“The Board has made an excellent choice in appointing Blake and I am confident that under his leadership the organization and our members are in good hands,” said Mr. Latimer. “Blake is committed to OMERS members, employers, unions, stakeholders and employees and to the execution of our mission and vision.  He is a leader who will make a difference for OMERS and I am excited for him and for the team.  I know that Blake will lead the organization to a new level of success.”

Mr. Hutcheson assumes his new role, having been with OMERS for ten years. The first eight and a half years he served as the CEO of Oxford Properties (an OMERS company) where he grew this business from being primarily a domestic operation to becoming a $50 billion, truly global leader in the real estate industry that returned an average of 12.5% during his tenure. Since April 2018, he has been the President and Chief Pension Officer at OMERS and has helped transform the Pension Services area within the organization, while carrying out responsibility for Strategy, Operations, Communications, Government Relations, Legal, and Data & Technology. Early this year, under his team’s leadership, OMERS approved a 2025 and 2030 Strategy, which will provide clear direction for the next five- and ten-year period. Blake has been a highly successful CEO for over 20 years and has served on more than 25 Boards and Committees of both public and private entities. He is a graduate of the University of Western Ontario, London School of Economics and Columbia University.

“It is an honour to be asked to take on this leadership role at this important time in the history of OMERS,” said Mr. Hutcheson. “I accept it with equanimity and tremendous enthusiasm. The leadership team we have at OMERS is terrific and I look forward to working with them. I have worked extremely closely with Michael for the last ten years, hold him in the highest regard, and believe that together we will model the CEO transition in a way that will make OMERS proud.”

Mr. Latimer concluded, “As the outgoing CEO, I would like to thank each and every employee of OMERS, past and present, for their contributions to our significant growth over these years.  I would also like to thank our Board of Directors for their support.  Without both, achieving our goals would not have been possible.  Across geographies, offices and businesses, We are All OMERS, and proud of it.  Everything we do at OMERS is in service to our members. They are our motivation and inspiration, and the reason we show up for work each and every day and do our best on their behalf.”

Founded in 1962, OMERS is one of Canada’s largest defined benefit pension plans, with $97 billion in net assets as at December 31, 2018. A jointly-sponsored pension plan, with 1,000 participating employers, OMERS invests and administers pensions on behalf of almost half a million active and retired members. OMERS members include union and non-union employees of municipalities, school boards, transit systems, electrical utilities, emergency services and children’s aid societies across Ontario. Contributions are funded equally by members and employers. OMERS has employees in Toronto, London, New York, Amsterdam, Luxembourg, Singapore, Sydney and other major cities across North America and Europe – originating and managing a diversified portfolio of high-quality investments in public markets, private equity, infrastructure and real estate.