OTTAWA — After former Saskatchewan MP Larry Spencer was turfed from the Canadian Alliance in 2003 for making inflammatory comments about homosexuality, a young Andrew Scheer stayed on to work in his office.

Spencer had told a Vancouver Sun reporter he believed homosexuality was a conspiracy and that he would support a bill to criminalize it. Stephen Harper, who led the Canadian Alliance at the time, was on the cusp of uniting with the Progressive Conservatives.

Harper fired Spencer from his critic role the same day the article was published, calling the comments “unacceptable” and out of line with the values of the party. Spencer issued an apology and withdrew from caucus. Scheer, a new graduate at the time, didn’t quit the Regina-Lumsden-Lake Centre MP’s constituency office.

On Tuesday night, hours after this story was first published and after repeated requests for comment since Sept. 3, the Conservative Party’s director of communications, Brock Harrison, emailed a statement saying: “Mr. Scheer disagreed with Mr. Spencer’s comments then. He still disagrees with him now.”

Spencer said he first crossed paths with Scheer in Ottawa at the beginning of his term and the young man made an impression on him by gathering “the meaty things from the newspapers” for his briefing notes. 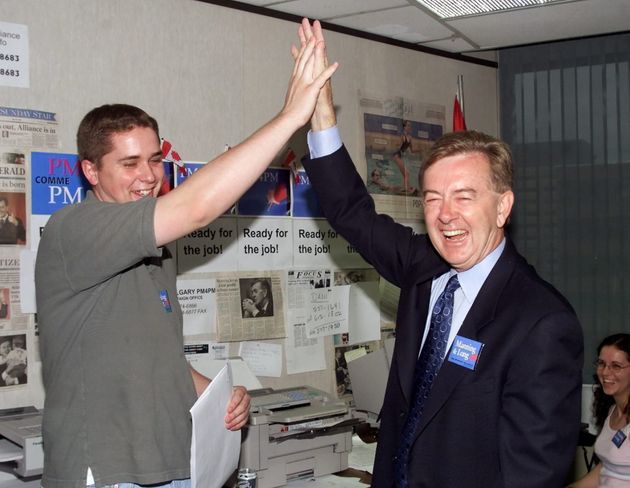 Jonathan Hayward/CPCanadian Alliance candidate Preston Manning gives a high five to Andrew Scheer of the University of Ottawa Canadian Alliance Club during a stop in the Manning campaign headquaters in Ottawa on July 3, 2000.

Scheer worked in Spencer’s constituency office for several months before jumping into politics himself.

In the lead-up to the 2004 election, Spencer was prevented from running under the banner of the newly formed Conservative Party. He lost his re-election bid as an Independent candidate.

Scheer, who ran under the Conservative banner, won in the nearby riding of Regina—Qu’Appelle. He was 25 and part of a wave of young Conservatives MP elected to the House of Commons.

Earlier Tuesday, the Conservative leader’s team provided a copy of an article from the 2004 election as a response to HuffPost’s queries.

The story from the Regina Leader-Post described “explosive issues” that had come up during the campaign. Scheer had accused his competitor, NDP incumbent Lorne Nystrom, of being soft on child pornography. The NDP candidate had responded by saying Scheer was lying and brought up his past as Spencer’s parliamentary assistant.

The newspaper wrote: “Scheer said he worked for Spencer but doesn’t necessarily share his political views.” It wasn’t clear from the story what views — abortion, same-sex marriage, or marijuana decriminalization for first-time offenders — Scheer didn’t share.

I’ve been wanting to have a little chat with Andrew and congratulate him and try to encourage him.Larry Spencer, former Saskatchewan MP

Little has been reported about Scheer’s work history before he won a seat in the House of Commons. He worked briefly as an insurance broker in Regina and also as a waiter at a local restaurant before running for public office.

Spencer is proud of Scheer’s accomplishments in Ottawa.

At one point during the phone interview, the former Baptist pastor filled a brief pause to inquire if he could ask a “personal question.”

“Could you get me a phone number of how to get a hold of Andrew on? I’ve been wanting to have a little chat with Andrew and congratulate him and try to encourage him.”

Scheer is currently at the helm of his first federal campaign as leader of the Conservative party.

Weeks before the campaign’s start, he was the target of Liberal attacks after the party re-circulated an edited clip of a 2005 speech Scheer delivered in the House of Commons criticizing same-sex marriage.

In 2006, Scheer voted in favour of a motion calling on the Harper government to reopen the same-sex marriage debate, as did most Tory MPs at the time.

Since becoming leader in 2017, Scheer has skipped marching in Pride parades.

In November 2017, months after becoming Conservative leader, Scheer spoke in favour of the government’s apology to LGBTQ2 people for decades of discrimination, including the shameful purge of gay Canadians from the civil service and military.

Scheer said the apology should be an opportunity to recommit to defending human rights, not just in Canada but around the world, noting that “too many countries” have policies the encourage the harassment of gay and lesbian people, leading to torture and death.

“Canada is better than that. We must do more to stand up for the LGBTQ2 community in places like Iran, Russia, and other countries where it is the target of brutal violence,” he said at the time. 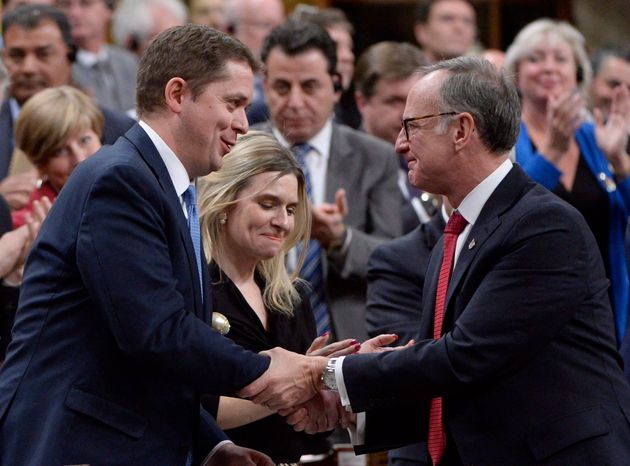 Adrian Wyld/CPConservative Leader Andrew Scheer shakes hands with Liberal MP Rob Oliphant (right) after Scheer's speech in the House of Commons on Nov. 28, 2017 following a formal apology to individuals harmed by federal legislation, policies, and practices that led to the oppression of and discrimination against LGBTQ2 people in Canada.

Scheer’s spokesperson said at the time that the Conservative leader “supports same-sex marriage as defined in law and as prime minister will of course uphold it.”

The Conservative leader did not take reporters’ questions for a week after the Liberal attack. When he eventually addressed media at a Toronto hotel, he did not apologize for his remarks that compared the legal recognition of gay marriage to calling a dog’s tail a leg.

“The issue is settled,” he said, at the end of August. “My personal views are that every single Canadian has the same quality of rights under the law and I will continue to uphold that.” Scheer promised to “stand up for equal access under the law for all Canadians, including LGBT Canadians.

He pledged that there will no attempts to revisit same-sex marriage. “I can be very, very clear on that.”

‘Nobody is going to be able to reverse equal marriage rights’

Svend Robinson was an NDP MP at the time when Spencer made his provocative comments.

Robinson made history as the first MP to come out as gay. In the same Vancouver Sun interview where Spencer made his provocative comments, he also singled out Robinson as someone who could train himself to be straight.

After leaving federal politics in 2004, Robinson is running for election again in British Columbia’s Burnaby North—Seymour riding, in a tough fight with a Liberal incumbent. With same-sex marriage legalized in 2005, the veteran New Democrat said the country has moved on to other topics. If political candidates want to debate about equality, he said, “let’s ask Justin Trudeau why he broke the promise that he made in 2015 to end the blood ban for gay men.”

Liberals campaigned in the 2015 election to end the “discriminatory” Canadian Blood Services’ ban on gay and bisexual men from donating blood if they’re sexually active. The Liberal government did not scrap the rule after four years in power, but did reduce the deferral period from five years to one in 2016, and then again to three months this spring.

Campaigning on the past as prologue

Scheer isn’t the only federal candidate to have his past resurface during the election campaign.

Photos of Justin Trudeau wearing brownface and blackface makeup from the 1990s and 2001 resurfaced in the wake of a story published by Time magazine last week. The prime minister called the photos “racist” and a “dumb” mistake.

The photos were from an “Arabian Nights”-themed event at a Vancouver private school where Trudeau was a teacher. A video surfaced of Trudeau wearing blackface when he was a guide at a white-water river rafting company in his early 20s. Conservatives have said they shared the video with Global News.